Michael Jackson: Addiction in the Privileged 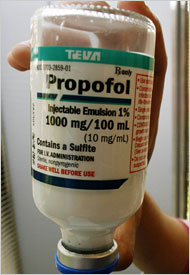 Addiction is a disease of excess. One might hypothesize how Michael Jackson was a victim of childhood abuse and wound up using drugs initially to quell this pain. We have previously published our clinical impressions that propofol (Diprivan®) abuse is commonly seen in victims of childhood abuse. Once he began using it was a simple matter to find physicians with mixed motives (whether codependent, star-struck or sociopathic) to prescribe toxic doses (not difficult at all with propofol) and even assist in the injection of addicting drugs. Once addiction takes hold, the addict has windows of opportunity every time they suffer consequences. The consequences, especially when severe, puncture the addict's defenses and denial. (A wife filing for divorce, being thrown in jail for driving under the influence, etc. may force the addict to rethink their current path).

The death of Michael Jackson underscores one of the tragedies of our culture: if you have an addictive disease, have sufficient funds, and are protected from negative consequences of your addiction: you die.

For Michael Jackson the consequences never did occur. This is an old story, one that is repeated over and over with the Hollywood set. The first step in getting better cannot occur unless consequences of the addiction are felt by the user. Our American culture will interrupt this senseless destruction of talent when and if societies privileged experience consequences of their addictions. I have no simple solution to this quandary.

Propofol is only used intravenously, so we are clear that drugs were being "mainlined" in the Jackson household. Propofol induces a rapid, short lived unconscious state -- very helpful in the operating room, but dangerous without proper life support. Commonly, a propofol (Diprivan®) user goes unconscious and falls, banging his or her head or bruising the body. Our propofol addicts commonly show up with contusions on the face and arms. When awakening from the unconscious state, the user feels rested and sometimes sexually amorous. One can make wild and probably worthless speculations about how these effects fit into Michael Jackson's tragic life. Sadly, our conjectures will do nothing now to stop the loss.

The issue with propofol addiction in professionals has come to the forefront due to Michael Jackson's untimely death. We have been spending time talking to reporters from major news organizations about propofol. Gerald Posner reports in The Daily Beast about propofol, partly based upon our work with addicts who suffer from addiction to this dangerous substance. Alicia Mundy from the Wall Street Journal weighs in on the propofol addiction story in this link. Pam Belluck from the New York Times wrote this article about addiction in anesthesiology personnel. You may also want to read this article in the Los Angeles Times. Ed Pilkington, special correspondent to The Guardian, published a review of propofol addiction based partly on our work.

When such tragedies occur, it provides a brief opportunity to open a dialog about addiction, an illness that affects 10 percent of Americans but remains largely misunderstood. Almost every day, I hear statements like "he should know better." If knowing better was the solution, we could educate everyone in the world about addiction and eradicate it in a single generation. But the solution is much more complex. In side the pages of this website are some of the solutions. I encourage everyone to learn more -- to decrease the tragedy in each of our own families and communities.